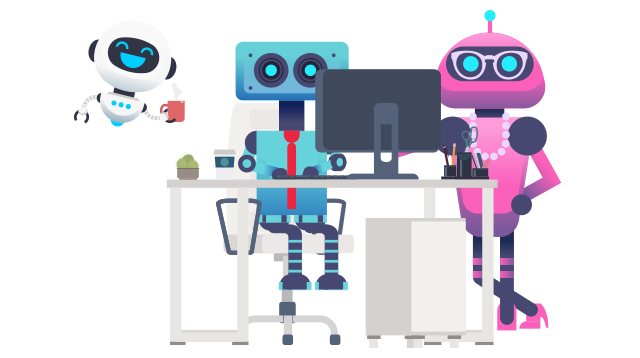 T-Impact have worked with regional, national and multi-national organisations across the globe to implement excellence in RPA, BPMS, AI and Automation solutions garnering a wealth of experience, business cases and knowledge in doing so.

Below, you can explore our some of the questions we get asked most frequently we have categorised these for your ease:

Robots leverage the IT systems that you have in place. They are not designed to be a replacement for API’s or IT systems but rather take tedious work off your staff.

If you are planning to build an API between IT systems, there are some scenarios where it might be better & cheaper to use a Robot to transfer data. APIs can be costly and time-consuming to develop and maintain. As soon as an API is written, software vendors release an update and the API often needs to be rewritten. Robots can often be deployed in weeks and cost much less than traditional development. They also have an element of AI which can adapt to some changes in IT systems, without required development.

ARE RPA AND SOFTWARE ROBOTS THE SAME THING?

WHAT IS RPA AS A SERVICE?

IS RPA AS A SERVICE THE SAME AS A SUBSCRIPTION

IS RPA THE SAME AS SOFTWARE AS A SERVICE (SAAS)?

No. When you purchase Software as a Service, you are sharing the same software with many other customers. You might be able to configure it but it can not be changed to support your business. RPA as a service includes a custom built solution which automates your business process and interacts with your IT systems.

ARE UIPATH LICENSES INCLUDING THE RPA SUBSCRIPTION?

Yes, T-Impact provide all licenses you will need for your RPA subscription.

IS HOSTING INCLUDED IN THE RPA SUBSCRIPTION?

HOW QUICKLY CAN YOU IMPLEMENT RPA AS A SERVICE?

Our solutions are often implemented in weeks, thanks to our unique fast track delivery method and subscription model. Our fastest solution was designed and built in 6 days, ready for customer acceptance and live deployment.

WHAT RETURN ON INVESTMENT (ROI) WILL I GET FROM INTELLIGENT AUTOMATION?

We can help you reduce your risks by calculating the benefits and costs before you start implementation. A well defined Intelligent Automation project will usually achieve break even 3 months after deployment and 200%+ ROI each year thereafter.

IS PROCESS IMPROVEMENT INCLUDED AS PART OF THE SERVICE?

T-Impact will help you to map processes and identify quick-win improvements, generally focused on removing defects and waste from your process. We will also highlight opportunities for you to leverage the power of RPA technology to improve your process in ways that could not be achieved with human labour. We may also identify more significant process improvements, for you to evaluate separately.

DO I HAVE TO BUY AN ORCHESTRATOR ROBOT?

WHAT IS THE DIFFERENCE BETWEEN AN ATTENDED AND UNATTENDED ROBOT?

Attended robots are sometimes called front office robots. They are used as personal assistants to automate many tasks performed by knowledge workers. They are typically initiated by staff from their desktop.

Unattended robots are sometimes called back office robots. They typically automate an entire workflow, as normally performed by one or more of your staff. Unattended robots are controlled by a robotic orchestrator, who performs the role of a supervisor, such as assigning work, monitoring performance & reporting progress. Better robot orchestrators can be controlled from mobile devices, such as phones, tablets or laptops.

WHY DO I HAVE TO PAY A SET-UP FEE AND A SUBSCRIPTION FEES?

Our RPA as a Service subscription is a financed model, whereby the development costs are more expensive than the set-up fee. The set-up fee enables us to offer a short commitment on the subscription service. You can cancel anytime after the initial 3-month commitment.

HOW LONG DOES MY CONTRACT LAST?

We don’t tie our customer into long term contracts. You can cancel your RPA as a Service subscription contract with one month’s notice, after the 3 months minimum obligation.

We set out to align our commercial incentives with our customers’ – we only make money if you get value from your robot and continue using it.

I AM RUNNING IN A CITRIX/VIRTUAL ENVIRONMENT, CAN A ROBOT WORK WITH THIS?

Yes. Our Robotics Subscriptions use UiPath technology, the best software for Citrix and Virtualised client environments. T-Impact have implemented numerous Robotic solutions in both Virtualised and Citrix environments.

WE HAVE ALREADY WRITTEN APIS AND MACROS TO INTEGRATE OUR IT SYSTEMS, WHY WOULD I NEED ANY FORM OF ROBOTICS?

Robots leverage the IT systems that you have in place. They are not designed to be a replacement for API’s or IT systems but rather take tedious work off your staff.

If you are planning to build an API between IT systems, there are some scenarios where it might be better & cheaper to use a Robot to transfer data. APIs can be costly and time-consuming to develop and maintain. As soon as an API is written, software vendors release an update and the API often needs to be rewritten. Robots can often be deployed in weeks and cost much less than traditional development. They also have an element of AI which can adapt to some changes in IT systems, without required development.

HOW DO I GAIN APPROVAL FROM OUR OTHER SOFTWARE VENDORS TO ALLOW RPA TO ACCESS THEIR SYSTEMS?

A Robot works in the same way a human would.

Creating a Process Design Document (PDD) will map out the process you are aiming to automate and therefore show the integration points with your other software vendors.

There is no integration at the Database layer, and the UiPath RPA software provides full auditing, so you can reassure your other software vendors that all activities are audited.

Artificial intelligence (AI) is a broad concept referring to a machine that mimics cognitive functions that humas associate with the human mind, such as learning, problem solving and reasoning.

WHAT ARE THE DIFFERENT TYPES OF AI?

HOW IS AI USED TODAY?

John McCarthy, coined the term “Artificial Intelligence” in 1956. He complained that “As soon as it works, no one calls it AI anymore”. Artificial Narrow Intelligence (ANI) is widely used today in both devices (calculators, mobile phones, kitchen appliances and cars) and software applications.

WHAT ARE THE BEST AI PLATFORMS?

Numerous AI platforms are available and they are constantly evolving, Some are specialised for specific industries or business functions, others are designed for general purpose use. Most of the better platforms are now available to be purchased on a usage basis, via a cloud platform. This has dramatically reduced the cost of AI projects. The best platforms include Microsoft Azure Machine Learning, IBM Watson, Google Deepmind, Google Cloud Prediction API, Rainbird and Tensorflow.

IS ROBOTICS THE SAME AS AI? I WANT TO WORK WITH AI, NOT ROBOTICS.

HOW DO ROBOTS ENABLE AI?

Leading RPA tools are pre-integrated with AI platforms, enabling AI decision making to be integrated into existing business processes & IT Systems. RPA automates the work flow in an organisation, at the point where machine learning or natural language processing/understanding is required, RPA passes control to the AI Platform. When the AI Platform returns the results, RPA can assess the level of confidence and determine if the AI results should be acted upon or passed to a human for verification.

DOES UIPATH HAVE AI?

UiPath’s  IPA (Intelligent Process Automation) solution combines the most cutting-edge computer vision, integration and unattended robotics with third party cognitive services from Google, IBM, Microsoft and ABBYY. With a continuous release cycle, they are committed to offering more and more services in the future.

CAN ROBOTICS ONLY WORK IN PHYSICAL ENVIRONMENTS?

HOW WILL THE TECHNOLOGY INTEGRATE?

A. RPA is designed to seamlessly integrate with your existing I.T. solutions, rather than replace them. You won’t find any additional expensive costs here.

WHAT IS THE EXPECTED ROI?

Although this is dependent on your organisation’s use for robotics and every single business case is difference, we expect to see ROIs quickly. For example in a £10,000 initial investment, previous results have yielded a 75% ROI by the 3rd month and 180% ROI within nine months.

HOW QUICKLY CAN WE MOVE ON THIS?

Robotics solutions can be implemented through the subscription model in a matter of days. Unlike time and material projects which require much more rigorous planning and development, our robotics can be rolled up swiftly to start benefitting you as quickly as possible.

IS SUPPORT AND HOSTING INCLUDED?

You are provided with daily access to robotics experts who can help resolve any issues you may encounter. You can discuss your exact support requirements when placing your order. Hosting is not included within the RPA package.

DO I HAVE TO BUY AN ORCHESTRATOR ROBOT?

You can purchase RPAaaS subscriptions without buying an Orchestrator license. If you choose not to buy an Orchestrator, you won’t incur any additional charges.

OTHER SUPPLIERS OFFER AN ORCHESTRATOR ROBOT FOR MUCH HIGHER COSTS. WHY IS YOURS BETTER VALUE?

We’re partnered with UiPath to offer ‘Sarah’, our Orchestrator robot who is utilised by multiple T-Impact customers and consequently these companies benefit from a 70% cost reduction. We are the only firm to offer this product.

WHAT KNOWLEDGE IS REQUIRED?

No existing knowledge is required as we’ll handle the entire implementation and set-up process. We’ll ensure that everyone who needs to understand how to set up processes can do so, so you don’t run into any issues if you lose staff members.

HOW QUICKLY CAN YOU IMPLEMENT A BUSINESS ARCHITECTURE PROJECT?

Our solutions can be implemented within weeks. We are all about moving fast and delivering concrete ROI.

DO YOU HAVE ADDITIONAL TRAINING OFFERINGS?

How do I know whether to use

Each has specific uses and design patterns. They can be customised and integrated to serve most any purpose but this creates a fragile & expensive solution that can significantly increase your operational costs.

TALK TO AN EXPERT

Contact us with a short note about your enquiry,

and we’ll get back to you soon!

“T-Impact brought the knowledge of the technology, the expertise in how to make it work effectively… to enable us to integrate it with our existing capabilities and our existing tool-sets and really provide a seamless experience for our staff.”

READ MORE TESTIMONIALS
Scroll
We use cookies on our website to give you the most relevant experience by remembering your preferences and repeat visits. By clicking “Accept”, you consent to the use of ALL the cookies.
Cookie settingsACCEPT
Manage consent

This website uses cookies to improve your experience while you navigate through the website. Out of these, the cookies that are categorized as necessary are stored on your browser as they are essential for the working of basic functionalities of the website. We also use third-party cookies that help us analyze and understand how you use this website. These cookies will be stored in your browser only with your consent. You also have the option to opt-out of these cookies. But opting out of some of these cookies may affect your browsing experience.
Necessary Always Enabled
Necessary cookies are absolutely essential for the website to function properly. This category only includes cookies that ensures basic functionalities and security features of the website. These cookies do not store any personal information.
Non-necessary
Any cookies that may not be particularly necessary for the website to function and is used specifically to collect user personal data via analytics, ads, other embedded contents are termed as non-necessary cookies. It is mandatory to procure user consent prior to running these cookies on your website.
SAVE & ACCEPT